In continuation of the Advertisement published in the Newspapers dated 19th October, 2012 applications are invited for the post of Assistant Teachers in the Govt. Aided/Sponsored Primary/Junior Basic Schools under all District Primary School Councils to fill up the district wise published vacancies. Information Booklet-cum-Application Forms will be available from different bank branches/CLRCs (North 24 Parganas) during the usual banking hours from 16.11.2012 mentioned below. Filled up Application Forms should be submitted in the same branch from which it has been collected.

Filled up specimen Application Forms are displayed for guidance of the applicants in all issuing Bank Branches/DPSCs/DI of Schools (PE) and such other places of the concerned districts.

Forms should be collected as per the Eligibility Criteria. Only SC/ST candidates should pay Rs. 25/-for Application Form. The issuing authority should mark SC/ST on the top of such forms. If the statement made by the candidate is found incorrect/incomplete, the Application Form will be cancelled. The candidates are requested to preserve the Admit Cards carefully. No duplicate copy will be issued. The candidates are requested to apply for one district as the TET examination will be conducted throughout the State on a single day. Period of Availability: During working hours of the concerned branches from 16.11.2012 to 30.11.2012 except Sundays and Bank Holidays.

An Appeal: All concerned are hereby earnestly requested to co-operate with the issuing authorities to ensure peaceful distribution and collection of the Application Forms and submission thereof. In case of any reported shortage/non-availability of Application Forms, West Bengal Board of Primary Education will supply the additional requirement of forms to each distribution centre through the concerned District Level Committee so long the requirement would be there. 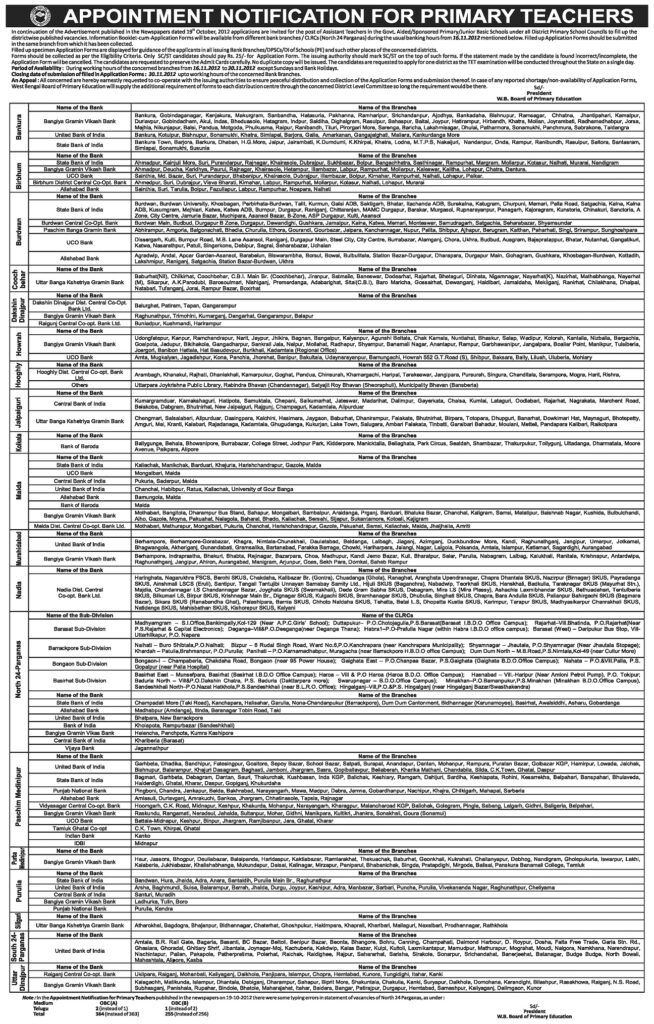